Following the Norman Conquest (1066) the Harwich peninsula was governed by the Bigod family who were holders of the manor of Dovercourt and Harwich. Though there was a local manor house (location?), the Lord was seldom if ever in residence. He lived at Castle Hedingham. Management of manorial affairs was in the hands of the Lord’s Steward (Senechal). He collected rents, handled transfers of properties and inheritances and heard complaints about debts, trespass and other misdemeanors. Twice a year at St. Barnabas (June 11) and in the late autumn a COURT GENERAL (Court Baron) was held, presided over by the Steward assisted by a jury of 12 men. The Court heard and made judgments on complaints received. The proceedings were recorded in the Court Rolls (still existing).

Also established was the COURT LEET, sitting the same days as the Court General, but with a fresh jury, whose task was to deal with minor criminal cases of assault or bloodshed. (The Coroner or Sheriff in the Hundred Court at the County Assizes dealt with more serious crimes involving imprisonment or the gallows or sudden death).

Various Manorial Officers (unpaid) served as either REEVE, enforcing the Lord’s Bailiff’s authority in collecting fines, rents, dues etc or the HAYWARD who dealt with pasture, stray animals, maintenance of lanes and ditches.

Two men were elected constables to maintain law and order and bring criminals to court.

Two elected ALETASTERS checked the quality of ale and bread.

ASSESSORS occasionally visited the manor to ensure the supervisors of the laws were doing their duty.

All these jobs were unpopular so officials were happy to be fined for inefficiency and discharged from their duties.

It is clear that the lives of the residents were strictly controlled, principally by locally appointed law enforcers, though these positions were unpopular and only grudgingly assumed. Laws concerning property, possessions, inheritances, minor and more serious criminality were strictly enforced and the necessary punishments exacted.

Markets and fairs were also strictly controlled, usually by a charter granted by the King. The earliest record of a charter for Harwich is 1222 when Henry III granted a market at Dovercourt to Hugh le Bigod, Earl of Norfolk. (Original does not survive but is enrolled in PRO Rotuli Chartarum (ed T.D. Hardy London, 1837, Vol 1 p. 523)). In 1253 Henry III granted a weekly market to Roger le Bigod at Harwich and also a fair on the Feastof the Ascension and eight days following (PRO Calendars of Charter Rolls. Vol 1. 1226-57) It is clear that markets and fairs were strictly controlled by the Lord of the Manor and used for revenue raising purposes.

The decay of the manorial system led in the 16th century to management of towns being taken over by the parishes. This particularly applied to Harwich as a planned town. So that another feature of local government to be considered is the powers and functions of the CHURCHWARDENS and the VESTRY. The Vestry of St. Nicholas was the governing body of this town and at a meeting (vestry), certain parishbners elected Churchwardens to supervise local affairs. The Church Book containing the accounts of the Churchwardens from 1550 – 1718, illustrates the range and diversity of their responsibilities. We see considerable attention being paid to the development of the Quay. Extensive local lab our, including women, was employed for reclaiming part of the harbor to create a quay. Emphasis was also placed on the maintenance of defenses, walls, ditches and protection against flooding. The Churchwardens also had jurisdiction over animal grazing and collection of a “herring” tax levied on “srangers” (non-local) fishermen. More to be expected was caring for the church, its furnishings and vestments.

The Norfolk dynasty continued as Lords of the Manor of Dovercourt and Harwich until 1572, when the Duke of Norfolk was executed for his implication in the plot to marry Mary Queen of V/it/p Scots and make her Queen of England. This event had a profound effect upon the fortunes of Harwich and Dovercourt because possession of the manor passed to Queen Elizabeth. The Royal assumption was not altogether popular with the townsfolk when they heard of the proposed sale of common pasture land by the Queen. A petition to the Privy Council brought partial redress.

In 1597, the Queen transferred the rights to Edward Coke, her Attorney General and a new charter was devised that substantially changed the structure of local government in Dovercourt and Harwich.

The 1597 Charter drawn up by Edward Coke re-iterates and reasserts all the rights as Lord of the Manor assigned to the Duke of Norfolk and its ratification by Queen Elizabeth. Coke appoints eight named deputies who are to act for him Raymond Knight, Thomas Twitt Daniel Richmond, John Hankin, Thomas Thompson, John Gray the Elder, Henry Hankin and Robert Ruffle. These are merchants and mariners from Harwich. Several names stand out on that list – Thomas Twitt whose daughter Sara was to marry Christopher Jones, and John Hankin who would be the future first Mayor under the 1604 Charter.

1600 brought a revised constitution to Harwich. The number of deputies was increased to twelve. The newcomers were William Smyth, James Barker, Thomas Gray and Thomas Shrive. Governance lay with two head burrows Raymond King and John Hankin, serving for one year to “Be assisted by the remainder”. Arrangements were made for regular meetings with fines for non-attendance. This group of deputies was known as the Court of Common Council and their proceedings were recorded in a Minute Book.

At the same time the Churchwardens relinquished many of their responsibilities for the town’s management, Subsequently their concerns were with church property, rents and the poor. The complete separation of municipal and ecclesiastical affairs took place when the 1604 Charter came into force. 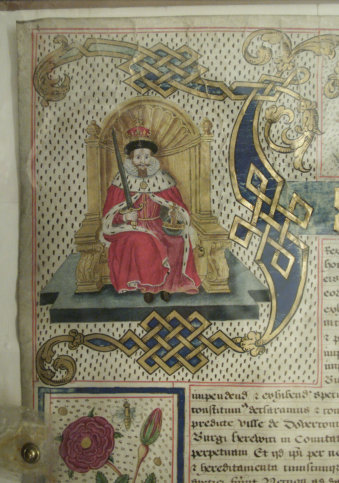 1604 harwich charterIn 1604 the charter was granted to the town by King James I. This royal charter marked a milestone in the town’s history, since it gave Harwich a new status having the rights, privileges and jurisdictions of a free borough with, for the first time, local control of the town’s affairs.

Harwich had been granted a number of charters before 1604, the earlier ones were principally concerned with markets and fairs. But in 1318, the Earl of Norfolk received a charter from his half-brother, Edward II, in which the phrase “free borough” first occurred and its citizens described as burgesses who could enjoy certain rights and privileges appertaining to a free borough.

Subsequent monarchs confirmed this charter. But with the execution of the Duke of Norfolk for treason in 1572, the manor of Harwich and Dovercourt passed to Queen Elizabeth. Through the influence of her Attorney General, Edward Coke, a new charter was granted in 1597, allowing the town to be governed by eight “head burrows” with a steward and bailiff. This was an important innovation, since it included, for the first time, local citizens in the actual government of the town – though all were nominated by Coke.

Coke’s charter was superceded in 1604 by a lengthy, comprehensive and inclusive document, which gave the town a new status and a form of local government that was to persist for several centuries.

The principal and new features were the appointment of eight _Aldermen, from whom one was to become Mayor (holding office for one year) and twenty-four Capital Burgesses. These constituted the Common Council. They had considerable powers to make laws, purchase and sell land and undertake legal suits. The “executive officer” was the Recorder – the first office-holder being none other than Sir Edward Coke himself who had retained his post as Attorney General with James I. The Recorder’s deputy was the Steward (a post still existing with an honorary role). The Mayor, Recorder and Steward also presided over a local court, hearing all kinds of pleas, actions and suits – providing they did not exceed £40 in costs.

Sergeants at Mace were appointed to accompany the Mayor on all his public appearances and had the right to enforce the law and apprehend miscreants and felons. These were accommodated in the Goal at the Guildhall.

Most significantly the Council had the right to appoint two Members of Parliament, emphasizing the political importance of Harwich as a strategic port and harbour, regularly used for the assembly of fleets for warfare, trade and exploration.

This charter was confirmed in a Charter from Charles II in 1665 and remained in force until the Borough ceased to exist in 1974.

The splendidly decorated 1604 Charter is still housed in the Guildhall, Church Street, Harwich.